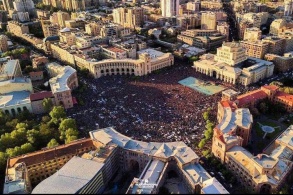 The recent developments in Armenia have confirmed my theory.

Do you know what it’s like to be far from your country on days like this? You probably don’t. You are terrified your friends and family might get injured or killed in the streets, you are terrified because the national security of your country is jeopardized, you are shaken because you are sure your country has no future. I was far-far away, so I got involved in an information war trying to raise awareness, my computer was swearing at me for keeping it on for 11 days. It’s over. The wait is over, the souls have woken up.

Distinguished citizens of the Czech Republic, honourable citizens of now free Armenia, you are the two nations that have proved to the whole world that a bloodless, peaceful revolution is possible.

We struggled for 11 days and won.

27 years of oppression, threats, poverty, corrupt authorities, unsolved crimes, October 27, March 1 and many other tragedies....
Ladies and gentlemen, Armenia is finally free from a couple of dictators, mostly from serzh sargsyan, the lame dictator who mocked, abused, robbed and morally raped the country for the past 10 years. That was not enough though, so he decided to hold a Constitutional referendum thus transforming Armenia into a parliamentary republic. The criminal “mastermind” was sure that people would accept this power grab as well.
All Armenian protests resulted in injuries, victims and disappointments. This time it was different. Eleven days of struggle, the Armenian Velvet Revolution, a brilliant plan of peaceful civil disobedience.... We are finally free... No more fear, the self-confidence of our people has been restored. Ten million Armenians all over the world showed their support to the struggle of their compatriots.

We still have a lot of work to do, a lot to change and improve, but we have taken an important step towards freedom. April 24 is the day we commemorate the innocent victims of the 1915 Armenian Genocide. However, from now on we'll be celebrating April 23 as a day when we finally stopped the moral genocide against our people. Armenia is probably the only country where people will be celebrating on April 23 and mourning on April 24.

However, the fight continues. We’ve cut the head of the snake, yet the body keeps moving. The victory is ours.